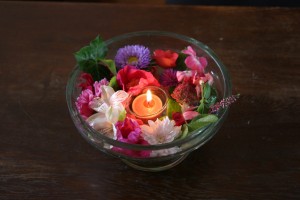 Meditation was something that occasionally “happened” within me naturally long before the early seventieth when I for the first time learned about a method. During four decades since then I have studied and practiced different traditions of meditation. Light Meditation became my speciality which I during many years also have taught by giving lectures and guidance in groups of adults, teenagers as well as children.

In october 2008, the day after the Vedic Master Class retreat in Cyprus was ended, a group of us participants still present had our morning meditation session together as we used to. During this meditation session suddenly a complete new way to meditate “happened” within me.  I may call it a meditation method even though I more experience it as a natural cosmic inner yoga; a method for Kundalini and chakra balancing and expanding consciousness or healing. I was myself astonished about how this was possible. Never before had I been introduced to something alike. Directly after this first “inner introduction” I was in a humble awe and deeply grateful and amazed. My first reflection was that this was impossible to figure out, but so incredible genial.

This Quantum Chakra Meditation & Inner Yoga became a start of a new era in  my life. I was given a “tool” for cutting through layers of unconsciousness into the core potential of human consciousness; to profoundly address and connect with and tune into the Spirit I am but simultaneously also coming deeper into my body and incarnated life on Earth and in this Cosmic Universe. I was “invited to quantum leap” into what chakra consciousness really is about. My “cosmic conscious vision” opened more and more and my whole life made sense, as a human being, as a woman, as a human individual, as a human social inhabitant amongst all other inhabitants on Earth and as one of innumerable inhabitants in the Cosmic Universe. Something new started that I fortunately could not back off from.

Since that day this Quantum Chakra Meditation & Inner Yoga has developed within me and I have practiced, or rather been a disciple myself to the guidance from within or from beyond. It may be described as a combination of lots of different methods, but still it is completely new, and actually not a method but a natural connection process that expands consciousness. It has become the most developing and engaging way for me spiritually; to expand my experience of oneness with Divinity, but also to relate more intimate with others, nature, the Earth and the whole Cosmos. It has developed into a way of “falling” into the core of life; to step by step “quantum leap” into the potential creative consciousness of the human being, passing through darkness in a new healing way, into the inner Cosmic Dance… from where Cosmic Consciousness and a Cosmoholistic conscious life can occur…

First I thought this was just for me. After some time I understood that this is a Gift for sharing. I do so by lecturing/facilitating/coaching/guiding Quantum Chakra Meditation & Inner Yoga for groups or in private sessions.

Quantum Chakra Meditation & Inner Yoga is a way to prepare for or support the natural phenomena of Kundalini to flow through all the chakras, and as well to open to or expand the cosmic consciousness in daily life. This yoga is not about body postures but about inner chakra yoga.