My greatest gift – a gift of Grace 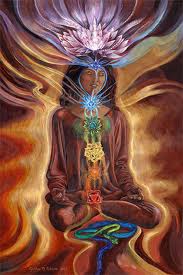 I have “been given” profound experiences of awakened Kundalini; the phenomenon of the psycho-spiritual energy.

The topic of Kundalini is generally very confusing, suppressed or unknown within the western civilization. I had absolutely no information about this natural but often dramatic phenomenon until 1987 when I for the first time visited India and  found a book named Third Eye and Kundalini by Dr. B.S,Goel. This book clarified very much about what I had “struggled” enormously to understand and deal with; what spontaneously and very dramatically happened to me already eleven years earlier, in 1976; an intense Kundalini awakening.

Even if I since my very first visit to India understood the gift and grace and potential healing, as well as potential difficulties for a novice, within the phenomenon of the awakening of Kundalini, it has taken me profound committed engagement and challenges to arrive at where I am today. Every study, every “struggle” and every “dark night of the Soul experience” was worth it.

It took me 36 years and the entrance to Internet until I found enough numerous of authentic resources of information, knowledge, research, documented life-stories and ancient scriptures, that so profoundly confirms to me the natural phenomena of Kundalini and the full relevance of my own experiences, so that I can fully acknowledge these experiences as a natural Gift of Grace. A Gift of Grace to embrace with love, understanding and gratefulness instead of feelings and thoughts that separates me from “normality”.

The most difficulties about having Kundalini experiences have been that they are so unfamiliar to most people within our modern cultures. Nothing in my life of being incarnated in a human body is though more beneficial and healing today than my Kundalini awareness and to the extent I allow and acknowledge it to be naturally present. I would say; The Divine Light, the Spirit, the Consciousness, the Chakras, the Body, the Earth and the entire Cosmos are held together and experienced by Kundalini from within.

As Kundalini is the fundamental cosmic sexual energy, I hold that it is of outmost relevance for couples devoted to a spiritual life to recognize and learn about sacred sex or energy tantra and sexual sublimation.

It is of great value for me when I can assist others in clarifying or giving comfort, confidence or support regarding the natural phenomena of Kundalini. Gracefully Kundalini has been my inner guide to reveal the Quantum Chakra Meditation & Inner Yoga; a way to prepare for or support the natural phenomena of Kundalini to flow through all the chakras, and as well to open to or expand the cosmic consciousness in daily life.

It just happened that I became a support in situations where people needed in their kundalini processes. Years back also Kundalini from within guided me to do writings that I have not yet (December 2012) published, even though people who have taken part of it have eagerly persuaded me to. I am though first now in a phase in my life where I feel completely confident and sure that one of the most important steps in my life is to share my personal story, experiences and guidance, as well as vital information and knowledge about the phenomenon of Kundalini.

The day my present body is no longer alive on earth, I advise my beloved grandchildren and other family, or anyone who might feel they miss me; Instead of grieving, learn to know me more by taking part of my writings or other form of left messages… especially about Kundalini… That’s my legacy…

Kundalini Rising: Exploring the Energy of Awakening – Around the globe, Kundalini energy is on the rise–from Olympic athletes and celebrities in Vogue magazine who are practicing Kundalini Yoga to an increased number of spiritual healers and seekers who are reporting spontaneous “kundalini awakenings.” But what is kundalini? Can this powerful energy really spark enlightenment? What does history tell us about it? Kundalini Rising offers 26 essays from some of today’s most prominent voices to answer these questions and more.[…] For anyone seeking practices, guidance or information Kundalini Rising offers a wealth of perspectives for anyone curious about the eternal mystery of kundalini.(From Amazon)

Carl Jung on Kundalini: “You see, the Kundalini in psychological terms is that which makes you go on the greatest adventures. …It is the quest that makes life livable, and this is Kundalini; this is the divine urge.” – The Psychology of Kundalini Yoga, Carl Jung. Lecture 1, 12 October 1932

Carl Jung about the Kundalini: To Jung the awakening of Kundalini out of mere potentiality is to “start a world which is totally different from our world: it is infinity” – John Henshaw

Lee Sanella, author of The Kundalini Experience, and the founder of the Kundalini Clinic; “The peripheral signs and symptoms, and the descriptions which refer to the spinal cord and the accessory systems, whatever they are — acupuncture or nadis — are all derivative from the central event in the brain, which is a change itself, which represents psychophysiological change in the whole organism. This change then gives the person who has spiritual inclinations the equipment with which to more adequately join with the divine, which as you said is the original meaning of yoga.”

Lee Sannella: What is Kundalini?  DVD

“The possibilities inherent in Kundalini are unlimited. Its implications in respect of every sphere of human life are enormous. What seekers often believe to be a power they can activate for their own spiritual or material benefit is the Power that rules the universe, the Infinite Intelligence of which we are but a tiny speck. Once the existence of an organic evolutionary mechanism in human beings is confirmed, Kundalini will assume an importance that is unimaginable at present. It will decisively influence every field of human activity and thought. The whole earth will be saturated with the idea that man is a pilgrim on the way to the Shrine of God-Consciousness.”– GOPI KRISHNA

J J SEMPLE is a leading authority on the practice of kundalini — the life force science. He has been practising the art for 35 years. “I succeeded only after failing many times over, only after stumbling. Kundalini tore me apart and put me back together,” he says. He talks to Poonam K Jain about how to live with the experience.

The Secrets of Secrets; On the Secret of the Golden Flower, Osho unravels technical terms used by Lao-’s predecessor, the Chinese mystic Lu Tsu, and explains his meditation techniques. He outlines the qualities of animus-the male, and anima-the female energy as delineated by Lu Tsu, and explains the importance of their relationship inside each individual.

What is Cosmic Consciousness? Gopi Krishna

The last interview with Gopi Krishna

The Biology of Kundalini by Jana Dixon